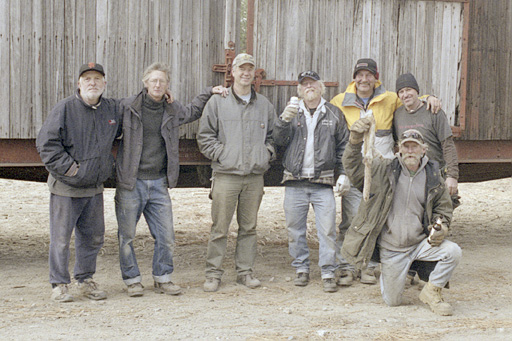 Some of those who helped with the move: Fred, Toby, Bruce, Red, Mike, Lee, and Rick (holding Mr. Squeaky Squirrel)

Moving two freight cars onto our site was a logistical challenge. While rails run from McCloud to Black Butte, the old style friction bearings on these cars meant that Union Pacific would not be able to accept them from shipment from Mt. Shasta to Black Butte. So our only option was to have them trucked. Well in advance of the move we first had to prepare a site. We found a local bulldozer operator, Vern Swenson, who, using a laser level, constructed a nice flat pad for the cars. He then dug trenches across the pad in which we then laid down gravel fill and used railroad ties (spares donated last year by the Central Oregon and Pacific Railway). The McCloud Railway provided eight sections of 60lb rail which we brought over and spiked down, adding more ballast fill. Then we were ready for the move.

On October 8th, the father-son team of Les and John Carlton out of Burney, the same folks who moved our caboose last year, brought in a 50 ton crane to Black Butte. A 30 ton crane was spotted at the McCloud Railway shop where our two cars had been moved to from the "runaround track" east of town. The McCloud Railway donated use of its big shop crane which greatly helped facilitate the lifting of the cars. The reefer came first, lifted off its trucks (wheelsets) which move separately. The reefer was placed on one lowboy and the trucks on the other. The next morning, after receiving the highway permit from Caltrans just in time, they were off to Black Butte.

Upon arrival the crane lifted the trucks onto our newly contructed track and then swung the reefer around and right down onto the pins on each truck. We breathed a sigh of relief in seeing that Fred's calculations were all correct — it all fit together perfectly. Then the process was repeated with the boxcar. We were even able to get the two cars to couple together. We were worried that high winds might torpedo the move of the boxcar but the weather cooperated throughout. The whole process came off flawlessly with much credit going to the Carltons, our track crew — Rick and Croatian Mike, the McCloud Railway folks, North Bank Fred for his tireless design and coordination work, and the other volunteers and contributors who together helped make it happen. 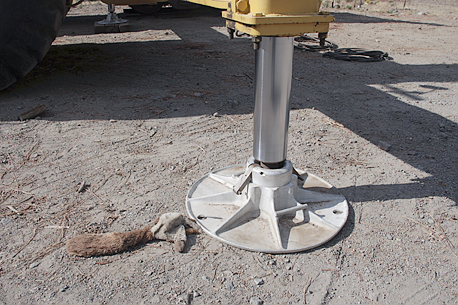 The only bad thing that happened was the tragic and needless death of Mr. Squeaky Squirrel, who was accidentally crushed beneath the outrigger leg of the 50 ton crane. He no longer squeaks, a fact causing great consternation to our yard dogs.

Click on the photos below for full-size images with captions: