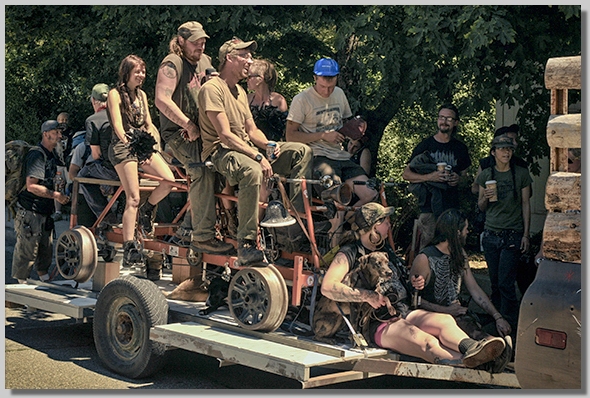 The BBCRC once again participated in the Dunsmuir Railroad Days event, entering a large float that included our railbike, the Bindlestiff Express. On the Friday evening before the parade a number of BBCRC affiliated musicians provided entertainment on stage by the depot. 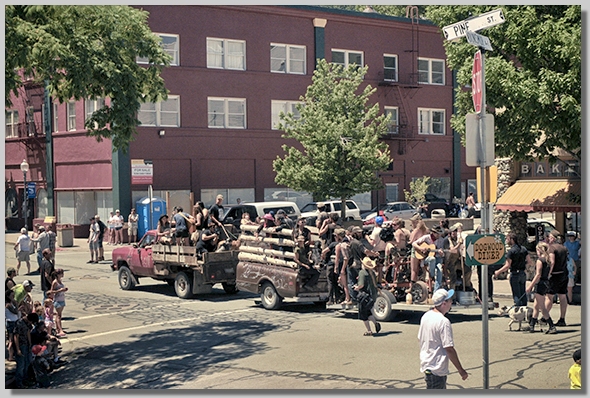 The BBCRC parade entry won the award for best railroad themed float. This helped build the momentum and excitement for the next day's event at Black Butte — the first ever Hobo Olympics competition! 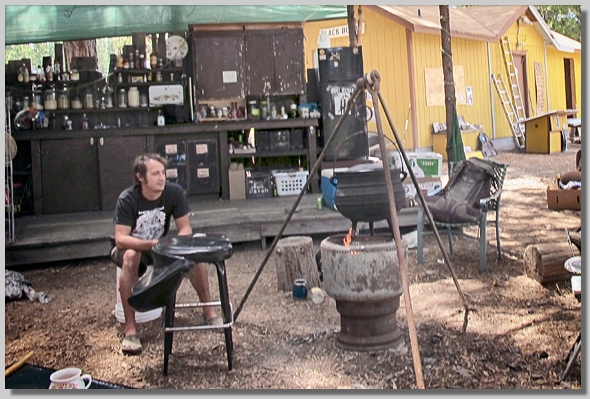 In preparation for feeding the masses, we acquired a huge 7½ gallon cauldron. A local friend, Ben K ingeniously welded together a tripod for the cauldron using old railroad brake rigging and rail spikes. 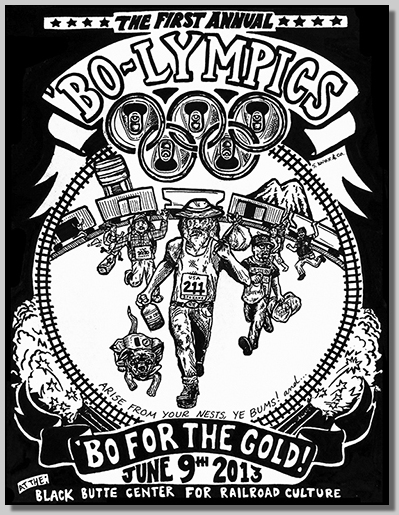 Something long talked about over the campfire finally became reality in 2013: The BBCRC organized and hosted the first ever "Bo-lympics", a one day competition celebrating the not quite lost arts of riding the rails. Poster artwork by Shannon Knox. 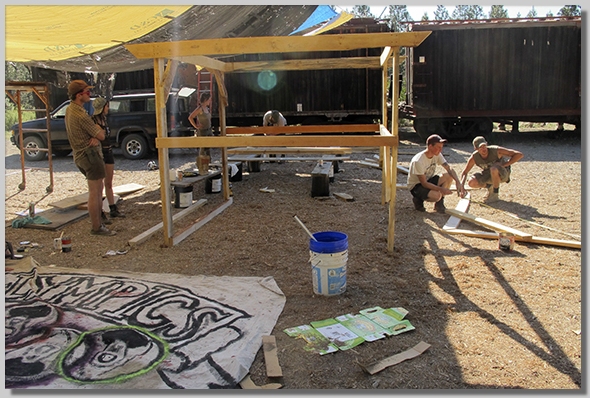 Early arrivals helped construct the "Bo-Lympics Village" out of random scavenged materials. It is estimated that upwards of $200 was spent building infrastructure for the great event. The Hamm's Beer Company is reportedly interested in a sweet corporate sponsorship deal for next year. 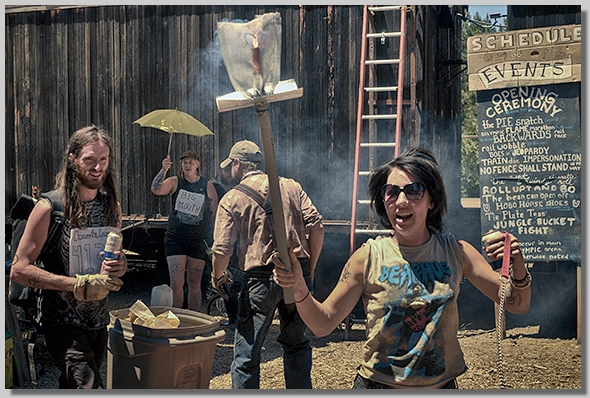 The Bo-Lympics begins with a solemn ceremony — the lighting of the Official Torch! Yes, that is a railroad style fusee. 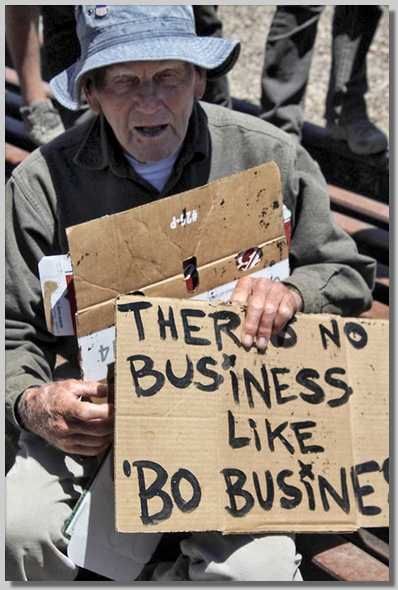 The event featured "Celebrity Hobo Judges" including Guitar Whitey who rode all the way back in the Great Depression and who was featured in the PBS documentary "Riding the Rails". 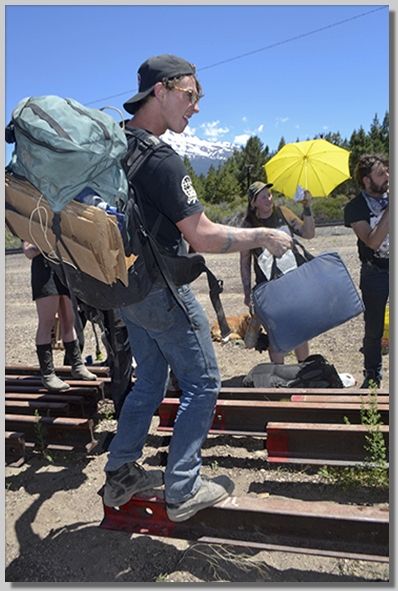 The "Rail Wobble" done with packs on, was our version of a balancing beam competition. 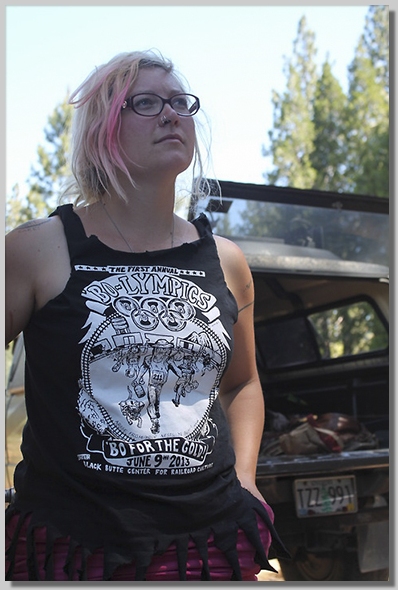 Claire modeling the official Bo-Lympics t-shirt. We quickly sold out of the highly prized shirts. More will be available soon, check out our Store page. 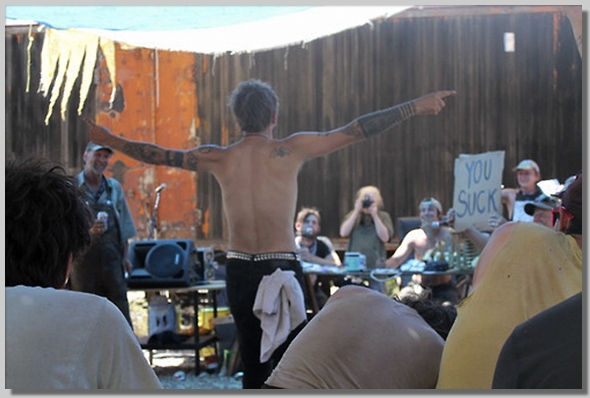 Among the many competitive events was Bos in Jeopardy — a challenging quiz of random railroad trivia — geography, history, operations, and the like. 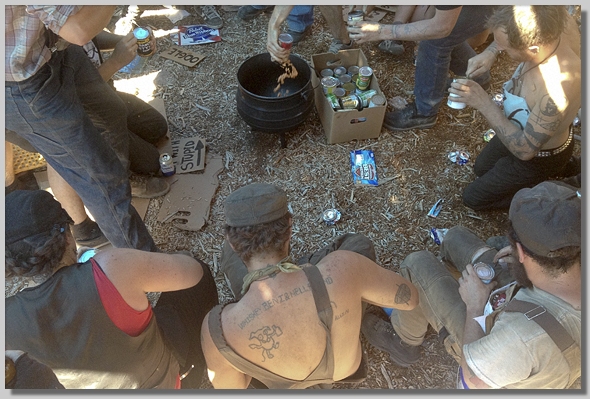 The Bean Can Open event measured skill (speed and good form) in quickly opening a can of beans with a P-38 military surplus can opener — an essential piece of traveling gear for many a tramp. 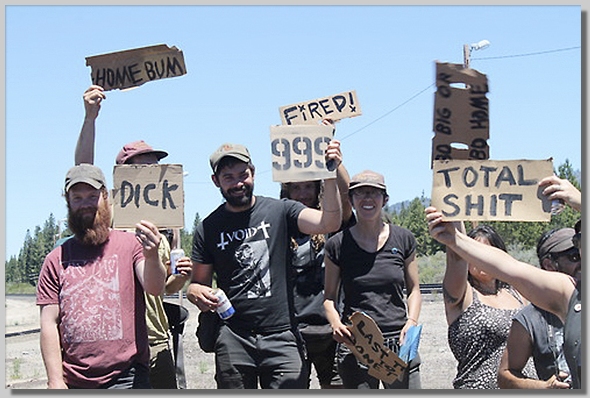 A tough and unruly hometown crowd left some contestants feeling sad and demoralized. 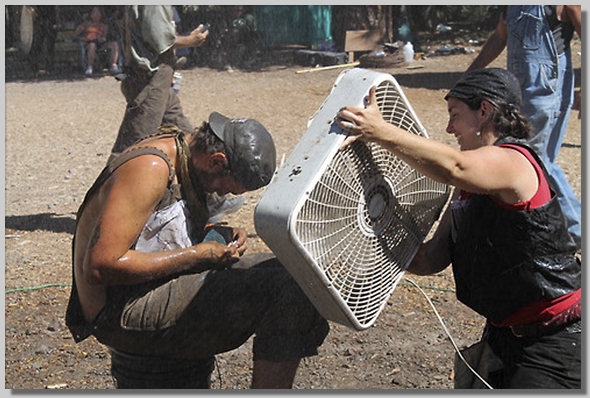 The "Wet and Windy Cigarette Roll" simulated the conditions experienced by a hobo trying to get a smoke rolled and lit in the middle of a storm. 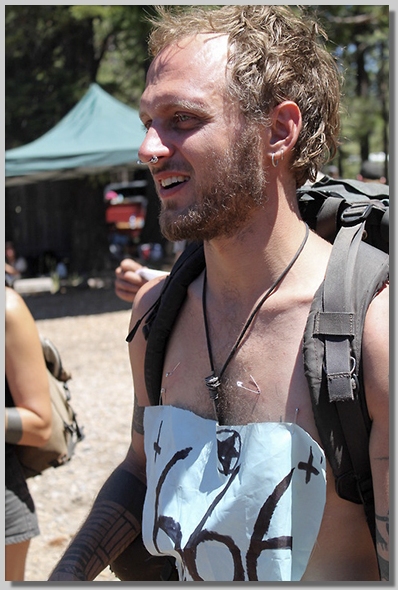 Cody got extra punk points for safely pinning his 666 number board right to his chest. 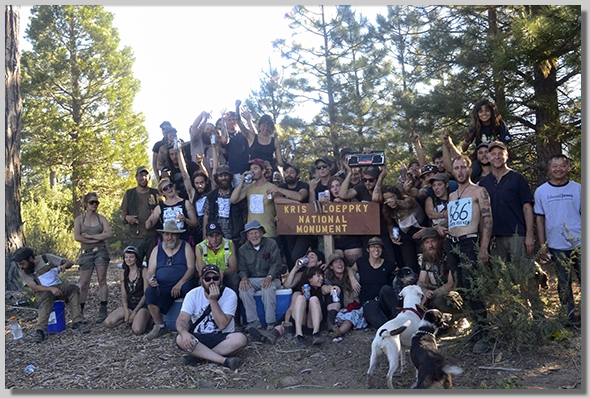 Some of the many bo-lympics competitors, spectators, organizers, and dogs gather for a late afternoon group shot at the Loeppky Monument, the site of the tie plate discus toss and the hobo horseshoes spike bucket competitions. 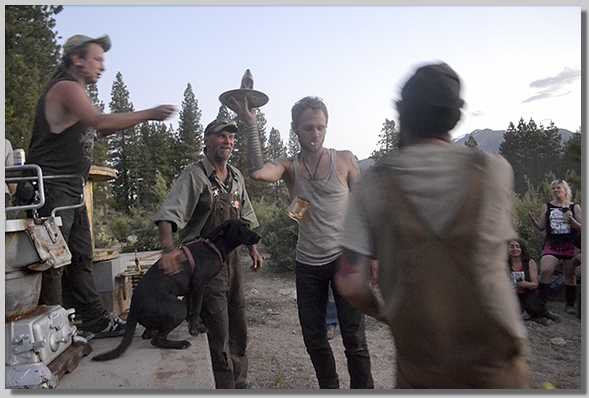 Suspense built as the judges compiled the results and the crowd gathered at for the awards ceremony. Cody, the "Hub City Kid", brings home the gold medal. 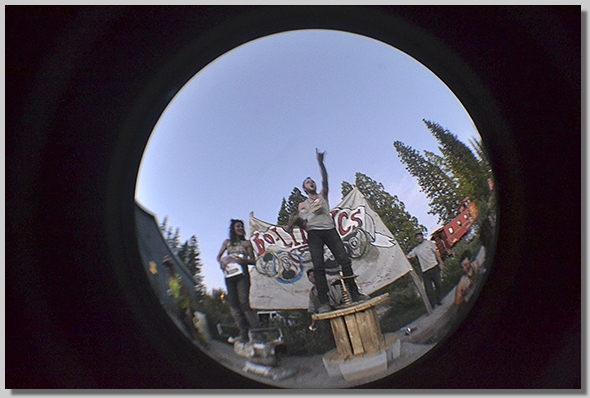 For more images of the 'Bo-lympics, check out the 'Bo-Lympics section on our Videos page.