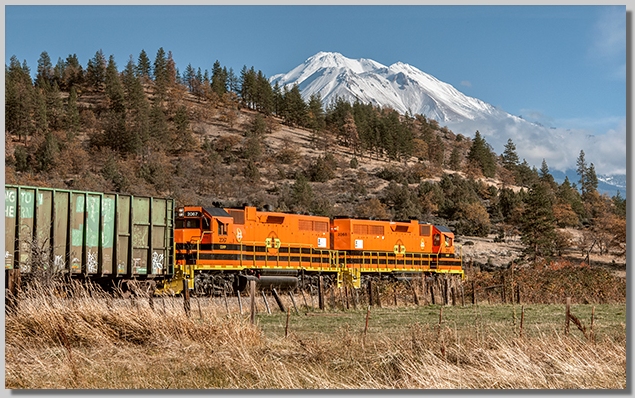 This list is current as of October, 2021. Most operate everyday, except as noted:

After being closed since May, 2008, through operations on the ex-SP Siskiyou Route between Black Butte and Medford, Oregon over Siskiyou Pass resumed in early November, 2015. Current operations are normally five trains per week (Monday-Friday) departing around 8am from CORP's yard area near downtown Weed, not Black Butte. The train usually meets a southbound out of Medford, swaps crews and locomotives at Hornbrook and continues. CORP operates a sporadic switch job between Weed and Black Butte for interchange with UP. During the late summer/fall wildfire season, CORP normally operates between Medford and Weed at night, in order to minimize the danger of sparking a wildfire. 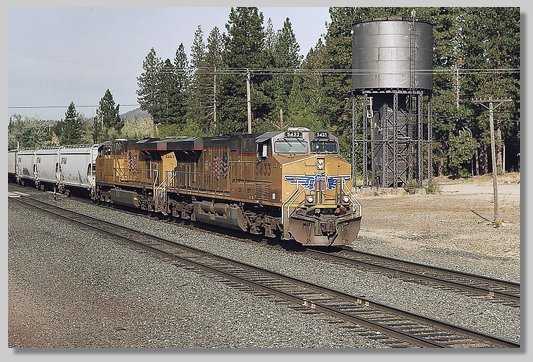 UP trains use symbols indicating the type of train and the origin/destination, rather than train numbers. These are the most common symbols used on the Shasta Division:

Note that since the advent of "Precision Scheduled Railroading" in early 2019, many train symbols and some routings changed, and they have continued to change since that time.

ZLCBR — Los Angeles (LATC Yard) to Portland (Brooklyn Yard) intermodal hotshot. Runs daily and usually through Black Butte in the early evening. Domestic double stacks, may have a few international containers up front and pigs. Usually has DPUs (except on Mondays when it is shorter), the only northbound to have them.

IOATAR — There is a sporadic train of international 40' containers that move from Oakland up to Tacoma every week or two. Usually comes through Black Butte mid-day.

MRVHK — Manifest originating in the Roseville departure yard to Hinkle, Oregon. Will work Eugene, Albany/Salem, and Albina Yard in Portland. Usually a late evening departure out of Roseville, meaning it will come through Black Butte in the morning. Often has CP cars and/or pinkish Potash Corp grainers.

MWCPT — West Colton to Portland (Portland Terminal's Lake Yard) general manifest freight. It comes from West Colton, may work in Roseville, usually not in the departure yard but over on the far east side of the yard. Its timing seems to vary widely. Also has empty lumber, more likely to have coil cars, autoracks, BNSF and CN boxcars.

MWCEU — West Colton to Eugene mixed freight, often with lots of empty lumber racks. Works Fresno and then Roseville and is usually over on the east side rather than the traditional departure yard. May also work at Anderson, CA and Klamath Falls, OR and occasionally at Black Butte when there is interchange traffic with CORP. It has sections for CORP, P & W, Coos Bay and local traffic in Eugene. Mostly empty lumber racks, UP/SP/Golden West boxcars. Unlikely to have coil or autorack cars nor CN/BNSF boxcars.

Note: One or two of the above manifests daily are usually split (known as "the splitter") into two sections at Dunsmuir. This allows longer trains to be operated most of the line while avoiding having long trains operating through the problematic Cantara Loop area between Dunsmuir and Black Butte. The split normally takes place at the north end of the yard in Dunsmuir. The front section continues by the depot in Dunsmuir and goes up to Black Butte. Two units that are based in Dunsmuir then tie on to the rest of the train and follow the first section up to Black Butte, then they are reassembed, a process that takes about 20 minutes or so. However, rarely, the two sections pass right through Black Butte and are reassembled up at Grass Lake.

IBRLC — This is the downgraded southbound intermodal train from Brooklyn Yard (Portland) to Los Angeles (LATC Yard via UP's East LA Yard) with mainly domestic 53s and some pigs. Its timing through Black Butte ranges from mid-morning to late afternoon daily.

MHKRV — Manifest originating at Hinkle Yard in eastern Oregon. Will work Portland/Albina Yard and perhaps Eugene before continuing south to Roseville, CA. May have a few Canadian cars.

MPWRV — This train is built in Eugene from hand offs from the CORP Roseburg train as well as from the Portland and Western and Coos Bay Rail Link. Identifiable from it many Oregon loaded lumber cars (Roseburg, Roseboro, etc). Unlikely to have CN/BNSF boxcars, autoracks, nor coil cars. Often seen mid-afternoon at Black Butte. Occasionally has DPUs. Currently operates 4x/week, leaving Eugene late evenings on Tues, Weds, Fri, Sat so thru Black Butte on Wed, Thurs, Sat and Sundays.

MPDWC — Manifest originating at Albina Yard in Portland going thru to West Colton, CA. It usually works Roseville but at times just crew changes and goes. Often a morning train through Black Butte but varies.

In addition to these listed trains, UP also operates occasional unit oil trains (tar sands oil going via CP/Hinkle to a refinery near Bakersfield) and the rare unit grain, auto, or military train. 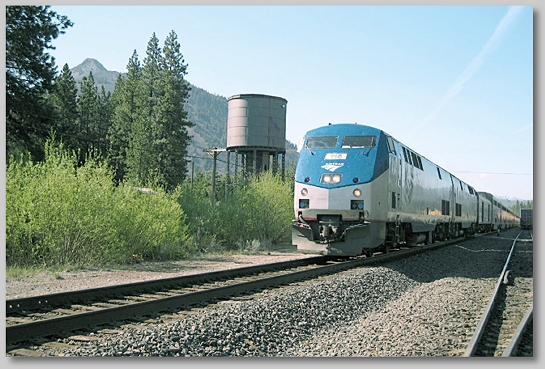 #11 "Coast Starlight" — If on time, the southbound Starlight passes through Black Butte shortly before midnight daily.