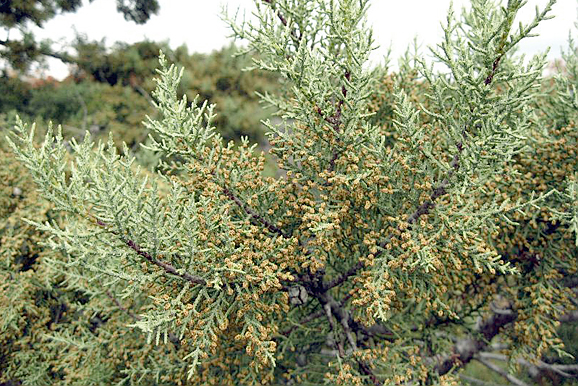 These are the native trees and shrubs we have identified growing on or immediately adjacent (within a mile) of our land at Black Butte Junction:

Ponderosa Pine (Pinus ponderosa) (All over, our most common tree)
Sugar Pine (Pinus lambertiana) (Scattered/rare on our land, near the Springs and in the woods going towards the truckstop)
Knobcone Pine (Pinus attenuata) (Scattered on our land, near truckstop and across tracks)
Incense Cedar (Calocedrus decurrens) (All over, second most common tree on our land)
White Fir (Abies concolor) (Common all over our land)
Douglas Fir (Pseudotsuga menziesii) (Largest ones near creek, also many recently planted)
Western Juniper (Juniperus occidentalis) (Not common, scattered across the land)

These non-native trees have been found growing on or near our land at Black Butte:

Coulter Pine (Pinus coulteri) (A stand of these southern California natives, identifiable by their huge cones, is just east of the wye. Why these trees are here is a mystery)
Giant Sequoia (Sequidendron giganteum) (Stands of this native of the western Sierra were apparently planted thirty or forty years ago north of the creek towards the western part of our land — this species grows to be the largest tree in the world)
White Poplar (Populus alba) (Just east of tracks near the creek. This is an invasive European species that was probably introduced by railroad families living at Black Butte Junction in the mid-1900s)
Black Locust (Robinia pseudoacacia) (Stands of the tree, which is native to parts of the Eastern US, are located in the Summit Lake area)
Scotch Broom (Cytisus scoparius) (This invasive shrub native to Europe is not common but can be found south of Summit Lake)
Apple (Malus sp.) (Near site of former railroad housing east of tracks)

For information on the work we are doing to restore the forest areas on our land and a list of some of the native and rare species we have been planting, see our "Forest Restoration" page.