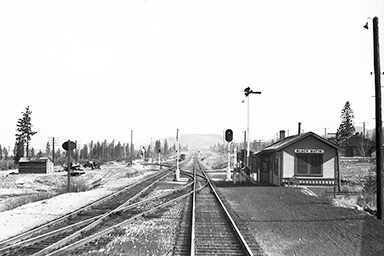 Many people have been drawn to Black Butte for its combination of trains and spectacular mountain scenery. This collection includes the work of a number of different photographers, as well as earlier historical photographs, taken over the course of more than 110 years. In sum, these photographs and accompanying captions tell the history of this special place. We would like to thank the following photographers, historians and collectors for donating their prints to this collection:

John Signor is a rail historian and former Southern Pacific trainman residing in Dunsmuir. He is the author of "Southern Pacific's Shasta Division". Quotes within the captions on some of the photographs from his collection here are taken from this book. For copies of his books and historical photographs, check out his website at "johnsignor.com".

Robert "Photo Bob" Morris is a long-time photographer of the rails also residing in Dunsmuir. He sells both his own and other historical railroad prints from his extensive collection going back several decades. "www.snowcrest.net/photobob".

North Bank Fred of Edgewood is a key BBCRC supporter and one of our founding members. He is also a retired train rider and skilled craftsman. His photography focuses on both railroading and the natural beauty of Siskiyou County, and can be seen at "northbankfred.com/images".

Dick Dorn of Yuba City, CA is a rail photographer whose work has been published in Trains and numerous other publications. He has been visiting Black Butte for many years, most recently to document the 2014 replacement of the "searchlight" signals at Black Butte. "dick.dorn@att.net".

Ryan Wilkerson is a part-time resident of Dunsmuir. He took these photographs of the Central Oregon and Pacific at Black Butte while attending the College of the Siskiyous in Weed back in 1999. "www.shastarails.com".

Phil Schmierr is a Union Pacific conductor based in Dunsmuir who has also worked on the McCloud River Railroad, the Western Pacific, and the Southern Pacific. He has worked the line through Black Butte for several decades and is all too familiar with its unpredictable winter weather. "rrpap@snowcrest.net".

Deuce 7 In addition to his photography, Deuce 7 is well-known for his unique paintings of rail and other subjects and he has been featured in galleries in San Francisco, New York, Minneapolis, and in Europe. Originally from Minneapolis, he is currently living in Dunsmuir. "bentwoseven@yahoo.com".

Ron Angle has been visiting, photographing, and filming trains at Black Butte for more than four decades. He is also active with ham radio and the mechanics of Automatic Train Control System technologies, which has earned him the nickname "Radioactive Ron".

John Carr is a former California resident who is now based in Texas. He has documented rail activity at numerous locations on the Black Butte sub-division, many of which can be seen on his website "www.carrtracks.com".

Kevin Lahey is a Mt. Shasta based photographer who focuses on the beautiful natural environment of Siskiyou County as well as railroading and other subjects. "kevinlahey.com".

Richard Steinheimer (1929-2011) became perhaps the most well known rail photographer in the western United States of all time. "Richard Steinheimer, a photographer for all seasons. Most friends and fans know him for his railroad images, but he was more than that. He found passion in 'everything photographic' and looked forward to seeing what was around the corner. Inquisitive until the end". These photographs were provided by his surviving spouse and railroad historian Shirley Burman "www.americanrailroadwomen.com".

Note: Many of the images in this show are copyrighted or otherwise restricted in their use. They should not be reproduced, either online or as prints, without the permission of the photographers/collecters. Please contact them directly, as the BBCRC is not able to provide permission to replicate any of these images.

Note: Southern Pacific designated all trains moving away from San Francisco as "eastbound" and those moving towards San Francisco as "westbound". Thus trains moving geographically northbound at Black Butte were referred to as "eastbound" while geographical southbounds were designated "westbound". After the SP merger, UP changed this to refer to northbounds and southbounds. For consistency and clarity our captions use northbound and southbound rather than the original Southern Pacific designations.
part 1 (1901 to mid-1980s) 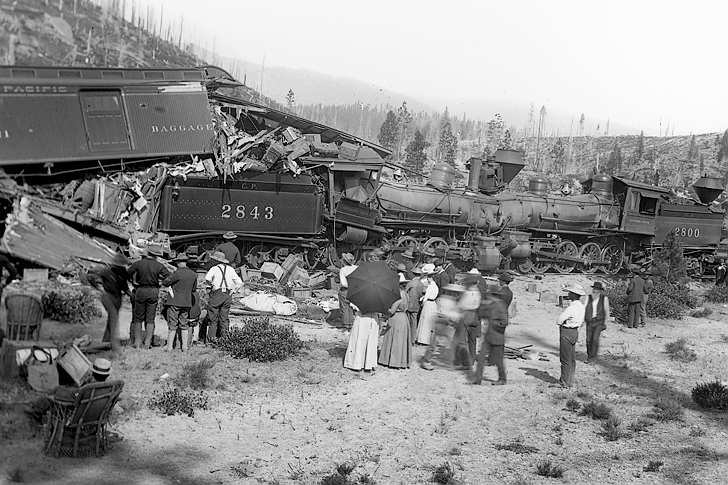 1901 Head-On Collision at Black Butte Summit: Long before the construction of the "Natron Cut-off" line to Klamath Falls and the construction of the yard and wye junction, Black Butte Summit was a location on the Southern Pacific Siskiyou Line between Dunsmuir and Ashland, OR. Established in 1887, a depot was located at the summit (near present day Summit Lake, about one mile south of our location at MP345). There was a turntable, probably for pushers being taken off at the top of the grade from Dunsmuir. The line then went through the South Weed area near the present-day Pilot truck stop (then known as Igerna) and on into downtown Weed. The station was abandoned in 1911.

On July 6, 1901 two passenger trains collided head-on at Black Butte Summit after a possible switch failure or miscommunication. Five of the six head end crew members saw the danger and jumped from the two trains to escape injury. Floyd Rankin, a 19 year old traveling cigar salesman from Fort Madison, Iowa, was killed in the wreck. He was most likely "riding the blinds" (in the front doorway of the baggage car behind the tender of the steam locomotive), a common practice among hobos at the time. This photo was taken the next day, July 7, 1901. Lewis Josselyn, collection of the BBCRC 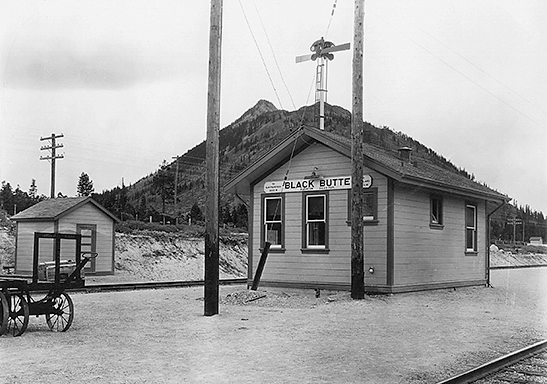 1926 Black Butte Trainorders Office. The construction of the "Natron Cut-off" as a lower grade alternative to the steep Siskiyou Line in 1924-26 required a re-routing of the line in the Black Butte area and the construction of a small yard and wye junction at present-day Black Butte. This photo was taken in October, 1926, shortly after the station's opening on September 1st. The station was moved to the opposite side of the main line following yard modifications in the early 1940s. It was also expanded. Southern Pacific Lines, collection of John Signor 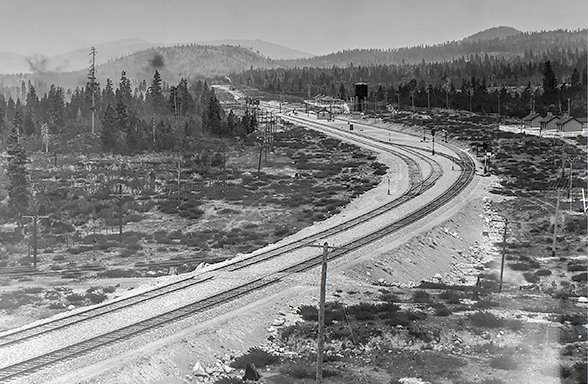 1926 The New Black Butte Yard. Taken from the hill east of the tracks and about half a mile south of the water tank, this location has continued to be popular with rail photographers. From this view you can see the track layout as well as the two sets of employee housing, north and south of the station. Southern Pacific Lines, collection of John Signor 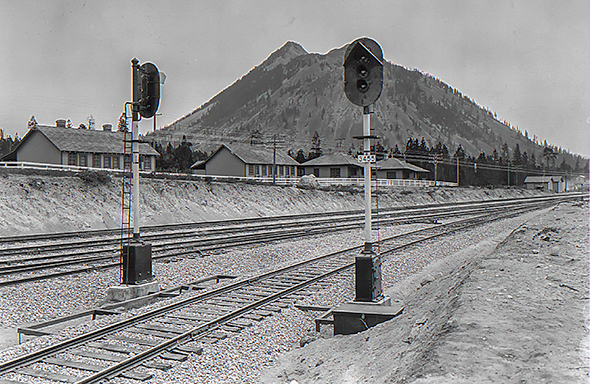 1926 Signals and Employee Housing at Black Butte. Union Switch and Signal type "L" color light signals, protecting the Siskiyou Line switch, were adopted for all new construction on the cut-off. Experience had shown that semaphore signals were not reliable in this territory during wet storms or freezing weather. Accumulated snow between the spectacle castings and lamps were enough to hold the signal arm in "clear" position even with a train in the block, and in extreme cases, lighter snow would freeze the arm to the mast. This seems likely to have been at least partly a result of the high winter winds that sometimes rage through this area. Note also the employee housing. Signal maintainers, their families, and other SP staff lived here up until the early 1970s. The foundations of these buildings can still be seen. Other remaining evidence of the past presence of this housing includes persistent perennial flowers, apple trees and the (invasive) groves of European white poplar trees that were undoubtedly planted by early immigrant railroad worker families. Southern Pacific Lines, collection of John Signor 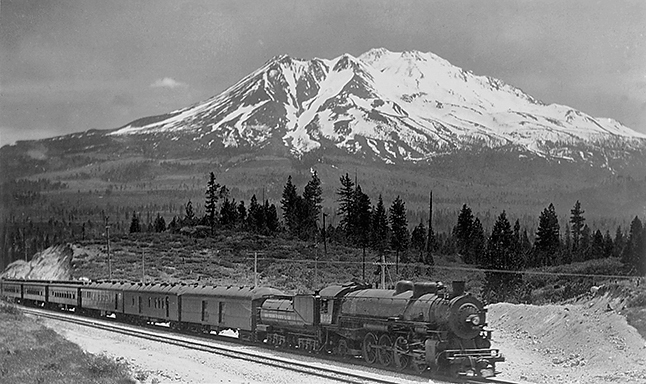 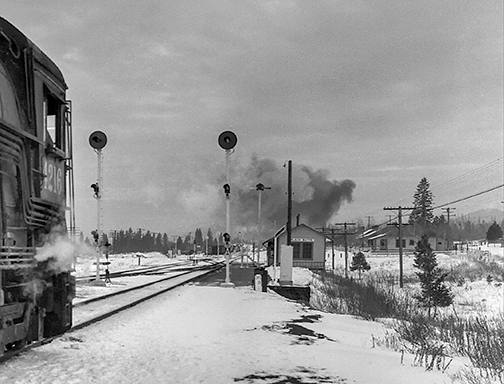 1942 Cab-Forward Steam at Black Butte. Following the Great Depression, which led to a serious decline in both freight and passenger traffic on the Shasta Route, things picked up during the busy World War II years. In this November, 1942 scene a SP "cab-forward" Class AC-10 4-8-8-2 Mallet, #4216, waits at the signals at the Black Butte crossover. The smoke from another steam locomotive is visible off to the north past the station. Southern Pacific Lines, collection of John Signor 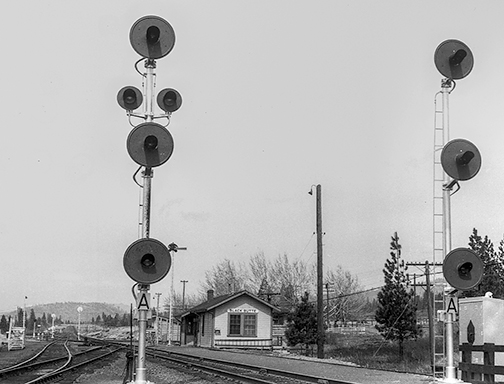 Late 1940s Target Signals and Black Butte Station. In this view the signals have been modified with two additional lights added to the mast and others replaced. CTC was in operation as far as Black Butte, beyond which running orders were required for the balance of the trip to Klamath Falls. collection of John Signor 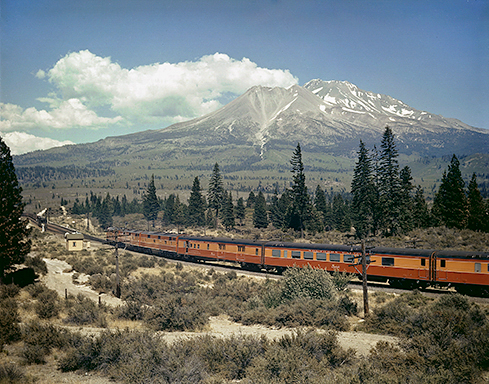 1949 Shasta Daylight. The newly-inaugurated streamlined Daylight #10, running between San Francisco and Portland and powered by EMD E units, approaches Black Butte from the south in the summer of 1949. Note the southbound freight, powered by a Mallet steam locomotive, waiting in the siding for the Daylight to pass. Southern Pacific Lines, collection of John Signor 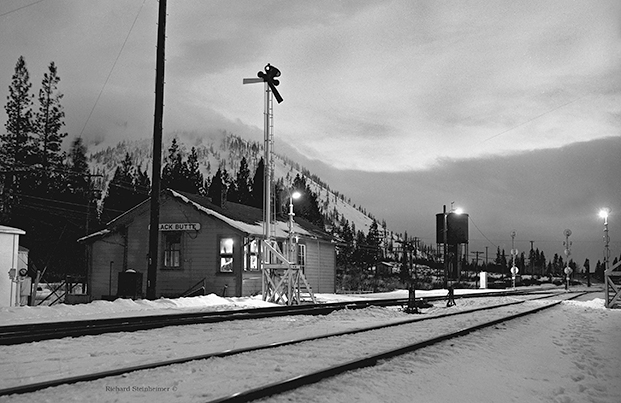 1964 "It's after sundown on a snowy day. But the air is momentarily clear at Black Butte junction and we look down and see the station with misty Black Butte behind it". January Richard Steinheimer Collection 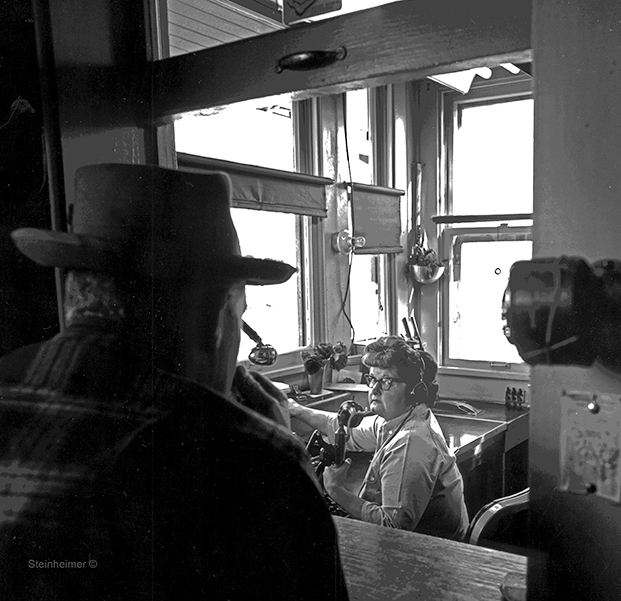 1964 "It's 1964 and there are still train order operators at Black Butte, but the forces of CTC are at work planning the installations that will obviate this station". January Richard Steinheimer Collection 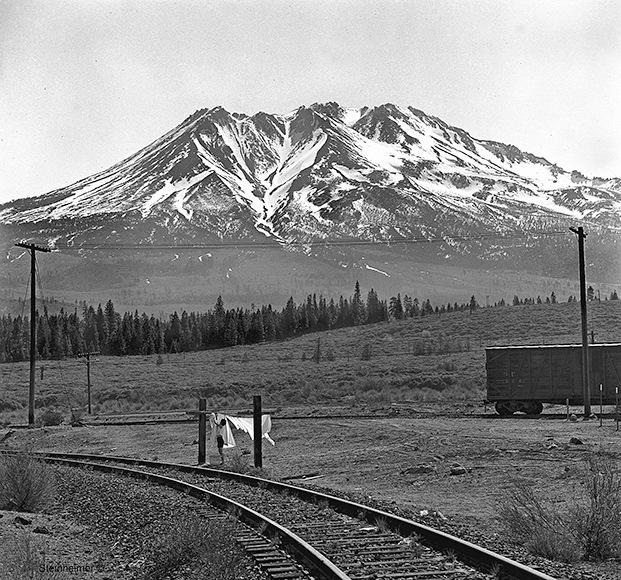 1964 "Mt.Shasta dominates the landscape as the laundry flies in the wind within the Siskiyou track wye". In the mid-1960s a number of SP rail workers, including signal maintainers and this operator, still lived in railroad housing near the wye east of the tracks. May 11 Richard Steinheimer Collection 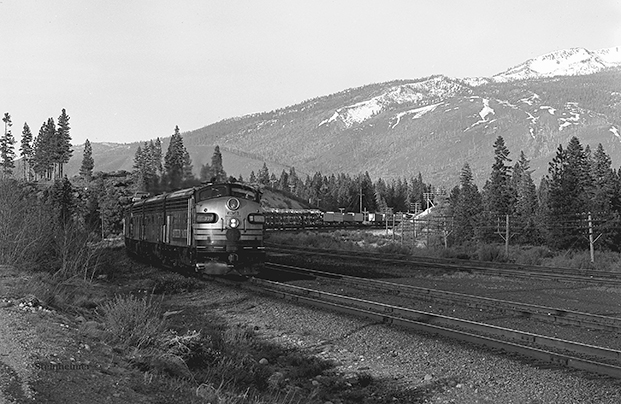 1964 High priority train #378 is rolling through Black Butte on the main line with Mt. Eddy in the background. "Making one last stop for the night at Black Butte. Tuesday dawned and I photographed the Cascade and Siskiyou trains in the morning". May 11 Richard Steinheimer Collection 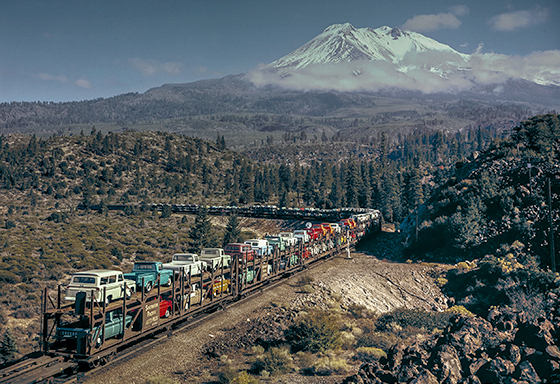 1964 Northbound Autoracks at MP348. Train #378 hauled vehicles from the GM plant in Warm Springs, CA to the Pacific Northwest. This curve, near M.P. 348 three miles north of the BBCRC, has been a famous photo spot ever since the line's construction. Southern Pacific Lines, collection of John Signor 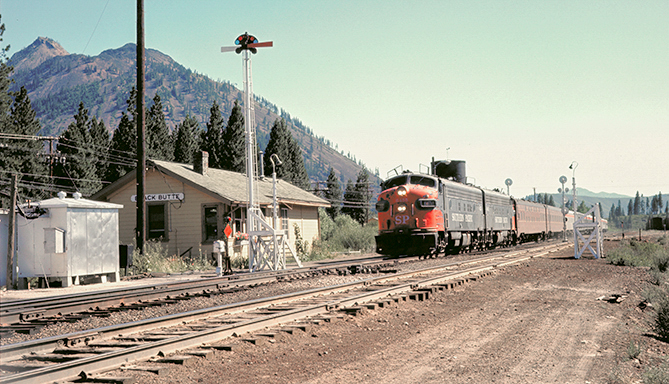 1964 Northbound #10 Shasta Daylight passing Black Butte. In the summer of 1964 the office was still staffed — by Operator Roberta Dugger. Note two Pennsy sleepers in the consist of the Daylight and the flower box under the operator's window. Two years later, with the installation of CTC, the Black Butte trainorders office closed forever. The building survived until 1970 when it was demolished by a derailing freight train. Frank Winterling, collection of John Signor 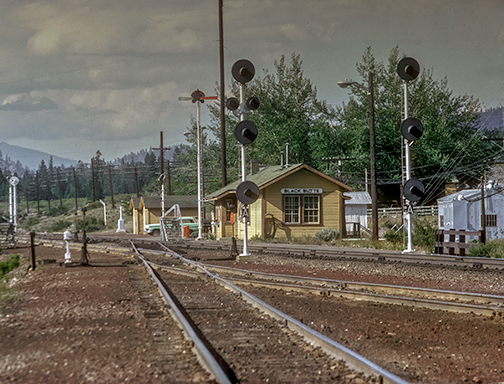 1964 Black Butte Station and Signals. Another view of the area in the mid-1960s. Note the speeder sheds just north of the station. They have long since been demolished but their cement foundations and inlayed track can still be seen today. F.E. Smith, collection of John Signor 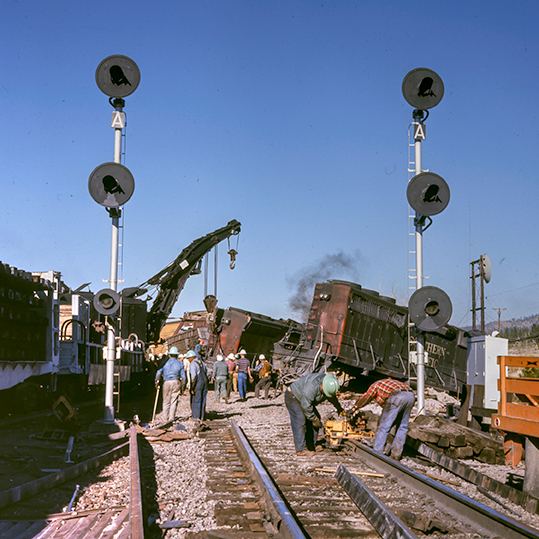 1970 Halloween Night Derailment. On the evening of October 31, 1970 a southbound freight derailed at Black Butte sending 38 cars and two locomotives off the tracks and destroying the closed Black Butte trainorders office. This was the derailment that led to the legendary burying of a damaged boxcar full of Canadian whiskey in the vicinity of Black Butte. For more photos of this and other wrecks and derailments at and around Black Butte see our "Derailments" page. 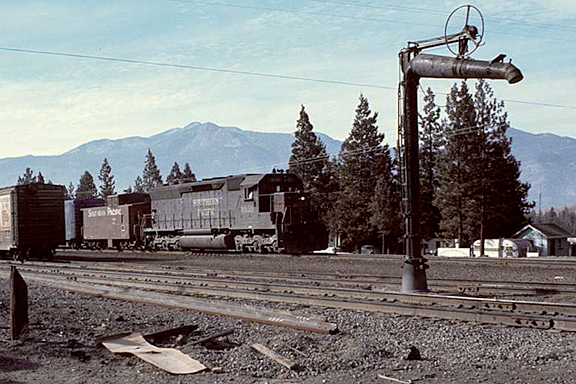 1976 Weed Local. In this November 5, 1976 shot the Weed local has come up from Dunsmuir and is switching at Black Butte. Note the blue building (with trailer attached) in the background. At the time this was the office for the first incarnation of the Black Butte Wrecking Yard. This structure has now been rehabilitated and expanded and functions as the BBCRC office. John Carr 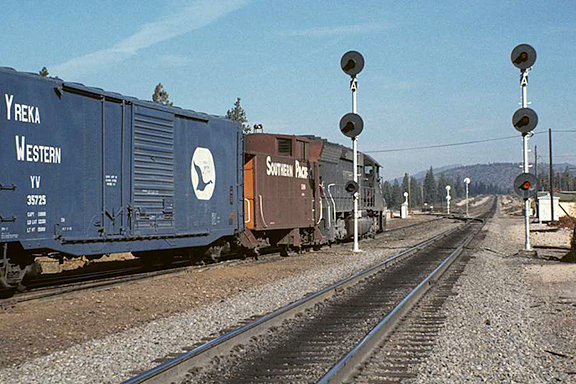 1976 Weed Local. The local moves north past the searchlight signals at the crossover towards the Siskiyou line wye. John Carr 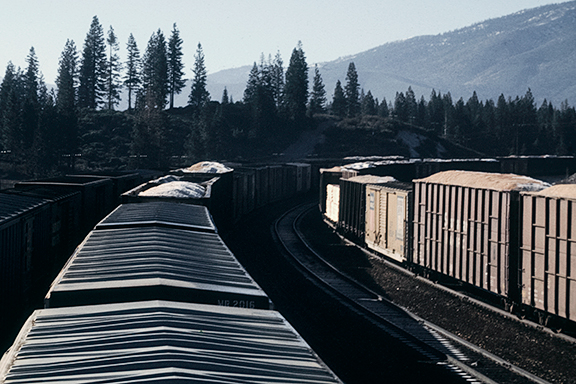 1977 Looking south from the Black Butte yard with cars on the main, the siding, and the storage tracks. North Bank Fred 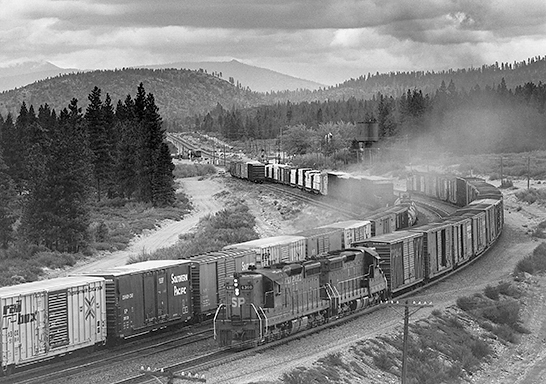 1980 View of Black Butte Yard. Taken from the classic hilltop vantage point east of the tracks and just south of the BBCRC, a Southern Pacific southbound, powered by a pair of SD-9s, passes a Black Butte Yard full of cars. The train is the Montague Local which worked out to Montague and went on duty in Dunsmuir. Dick Dorn 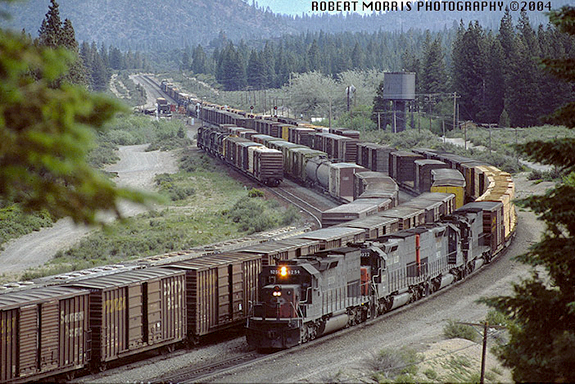 circa mid-1980s Another Hilltop View. A southbound is on the main as a northbound, possibly a Siskiyou Line train, works the Black Butte Yard. Robert Morris