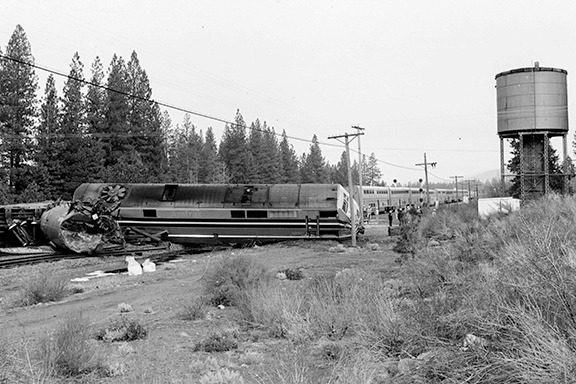 2000 Coast Starlight Accident at Black Butte. Around 1:45am on the morning of December 7, 2000, the Central Oregon and Pacific was switching at Black Butte Yard. A couple of cars, including a (luckily empty) tank car, got away from the crew and went through the crossover out on the main where they were hit by the southbound Coast Starlight, #11, running at track speed. There were no deaths or serious injuries among the passengers. The Amtrak engineer in the locomotive that tipped over was injured. The accident destroyed the classic water spout at Black Butte; its utilitarian replacement lacks the charm of the original. Robert Morris 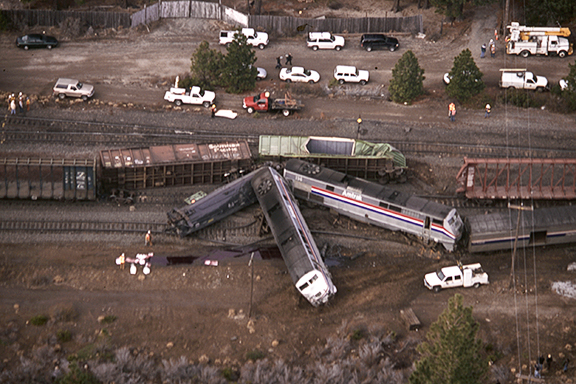 2000 Coast Starlight Accident From Above. The derailment triggered a major emergency response and received a lot of publicity. This photo was published in the Redding newspaper. Kevin Lahey 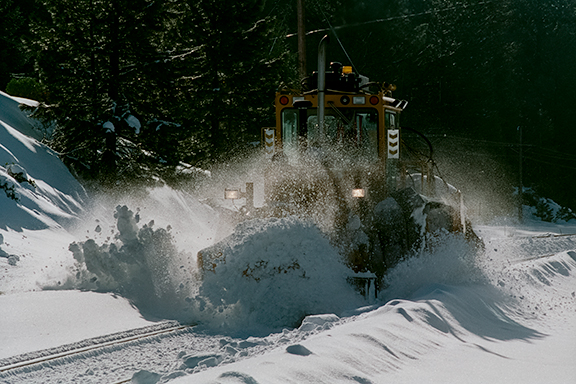 circa early 2000s After the Snowstorm. Severe winter storms have long been a feature at Black Butte. Back in December, 1936 and January, 1937 one of the most severe snow events known to hit the region continued for many weeks. Black Butte was plagued with winds which frequently approached 85 miles per hour, and it was necessary to operate spreaders and rotary snowplows north to Klamath Falls for 40 consecutive days to clear drifts. On this day in the early 2000s, the situation is much less severe and a ballast regulator is clearing the snow from the previous night. Still, the photographer is about to get covered in snow! North Bank Fred 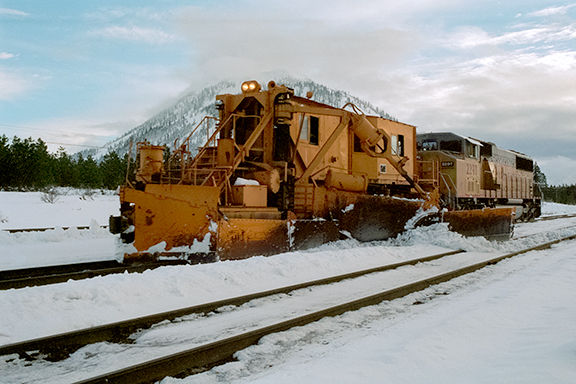 circa early 2000s Jordan spreader at Black Butte. After particularly intense snow storms the Jordan spreader, based in Dunsmuir, is used to clear the tracks. North Bank Fred 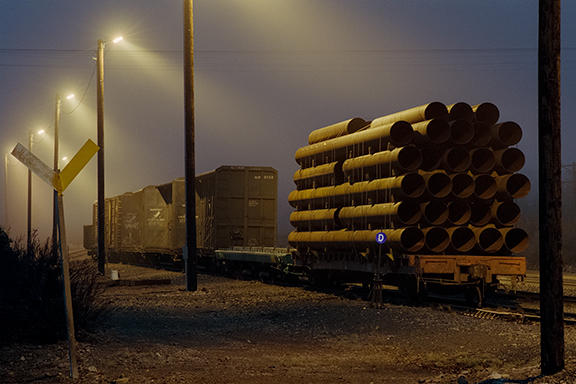 circa 2003 Black Butte Yard at Night. The yard lights have just been replaced (after once again being shot out). During the years after the auto wrecking yard moved to Highway 97 but before the BBCRC was established adjacent to the yard, there were few eyes on the scene and the area was plagued with illegal shooting and dumping. Still, North Bank Fred was a daily presence and was known by all the rail crews. North Bank Fred 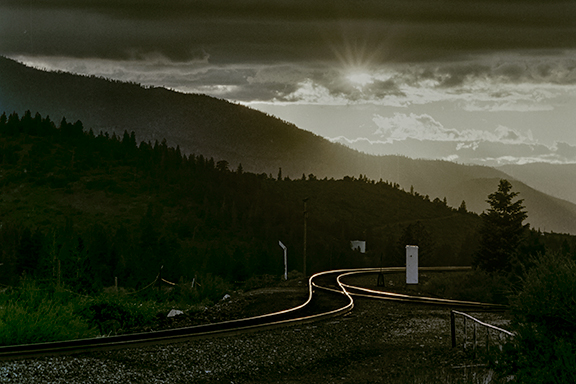 circa 2003 Black Butte Sunset. The best place to watch the sunset at Black Butte is at the wye, with its view looking out towards the Shasta Valley. North Bank Fred 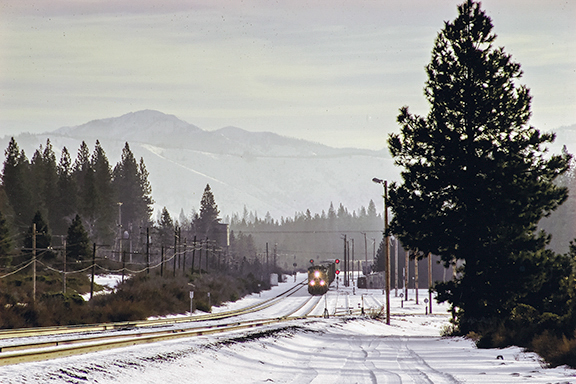 2011 UP Northbound in the Siding. Just north of the Black Butte wye junction with the Siskiyou Line begins a steep grade, requiring departing freights to pull hard. While Mt. Shasta draws a lot of attention, Mount Eddy, in the background, is the highest peak in the Klamath Mountains at 9025' and is an impressive feature of the scenery around Black Butte as well. Phil Schmierr 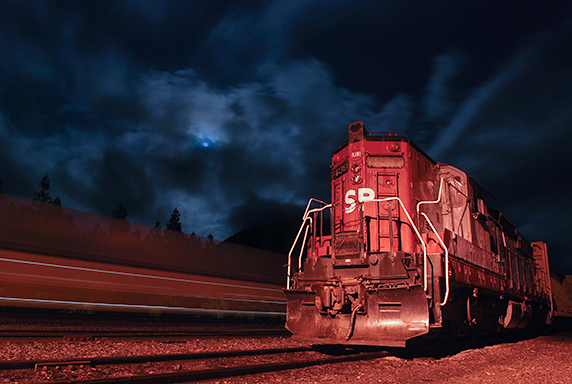 2012 A Ghost-Like SD-9 Revisits Black Butte. Following the 2008 closure of operations over the Siskiyou Mountains, CORP continued to operate an isolated segment of line between Black Butte and Montague. Mostly this involves sporadic traffic in and out of the Roseburg Lumber Mill in Weed for interchange to or from Union Pacific at Black Butte. But occasionally, CORP has handled equipment coming from the mainly moribund Yreka Western Railroad. In June, 2012 an ex-Southern Pacific SD-9 showed up at Black Butte, coming from Yreka and off to a new owner in Washington State. While no longer in SP paint, the SD-9 mysteriously regained its classic SP logo while in the vicinity of Black Butte. Deuce 7 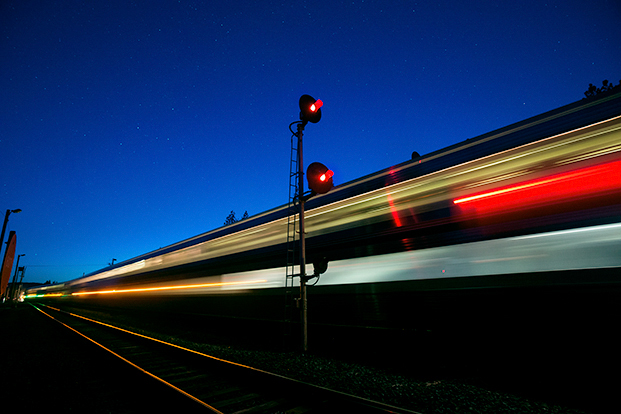 2014 On April 8th, Union Pacific replaced the longstanding classic searchlight signals at Black Butte. This and the following photo capture the last nights of the searchlights in operation. Around 6am on the morning of April 6th the northbound Coast Starlight #14 is going through the crossover into the siding to wait for a southbound freight. Dick Dorn 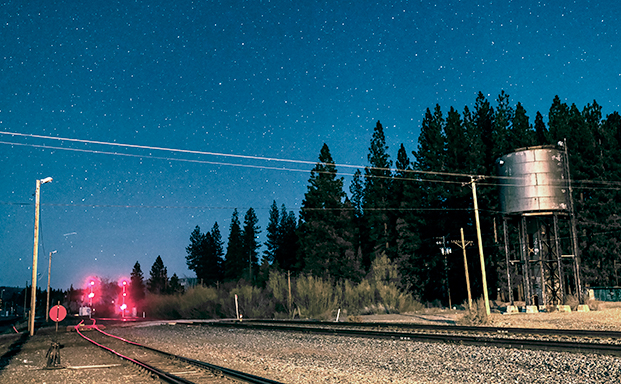 2014 Looking north on the night of April 6th, the iconic triple mast searchlights at the Black Butte crossovers are illuminated. Dick Dorn 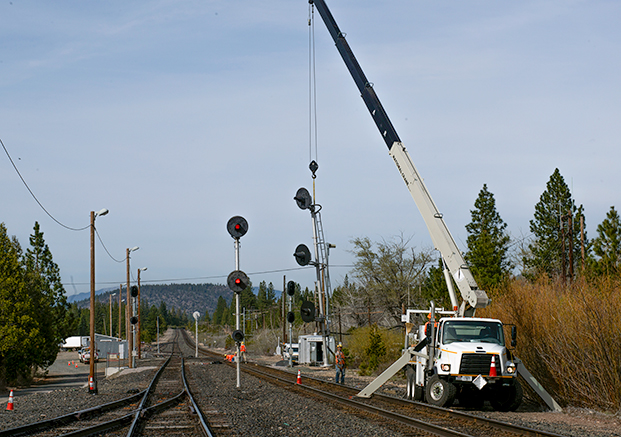 2014 On April 8th, in a carefully coordinated and long planned out operation, the UP signal department dismantled all the searchlight signals at Black Butte and cut in their replacements. The searchlights at the crossovers, along with several others, were then donated to the BBCRC which subsequently mounted and restored them just a few hundred feet from their original home. See our Searchlight page for details. Dick Dorn 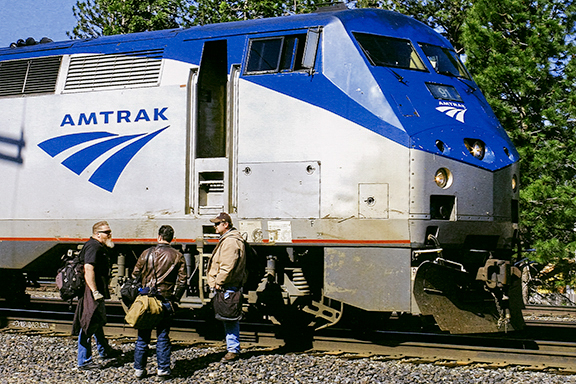 2014 The Coast Starlight Pays a Visit to the BBCRC. In early May, 2014 Amtrak's premier long-distance train, running late, stopped unexpectedly for a crew change. While not a regular stop, the Starlight has been known to make stops at Black Butte from time to time — sometimes when it is running late for the crew change which would normally take place in Klamath Falls, sometimes due to track or other logistical issues and sometimes seemingly at random. Ron Angle 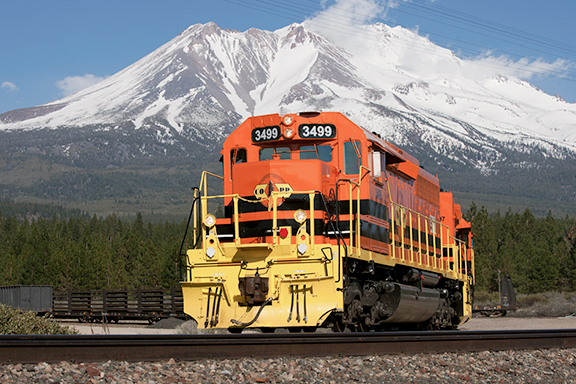 2015 CORP Welded Rail Train at the wye. After a seven year closure, the Central Oregon and Pacific began efforts to re-open the Siskiyou Line in early 2015. In this April 2 shot, CORP is leaving Black Butte with a load of welded rail interchanged from Union Pacific for the line's rebuilding. CORP resumed regular operations over the Siskiyou Line in November, 2015. Ryan Wilkerson