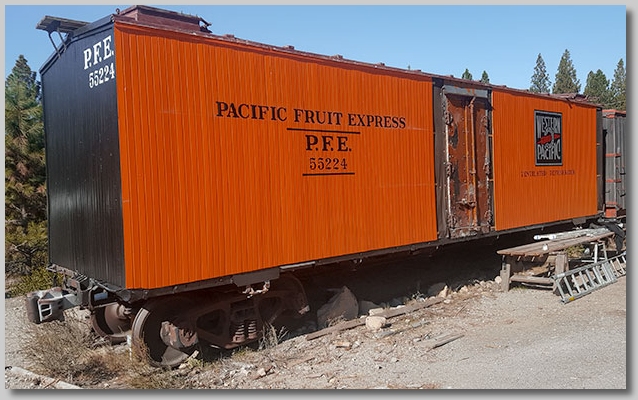 In October, 2008 historic 1923 Pacific Fruit Express/Western Pacific wood iced refrigerator car #55224 arrived at Black Butte following its move from the McCloud Railway, where it had been stored for many years. Photos and a description of the move are shown here.

Our reefer car was originally owned by Pacific Fruit Express, a company formed in 1907 and jointly owned by Southern Pacific and Union Pacific. A reefer is a slang term for an iced refrigerator car. It has four rooftop hatches through which ice would be loaded in order to keep produce cool. PFE reefers would often be loaded in central California and travel eastward, all the way to Chicago and beyond, with loads of California-grown fruit and vegetables.

PFE 55224 was built for the Western Pacific in 1923. The first group was PFE 50001-52000. In 1924 52001-52775 were added. Both groups were clones of PFE's R-30-13 design (1913 cubic feet), except the first group had Hutchins metal roofs. These cars were fully integrated with the PFE fleet, which assigned them and performed the maintenance. They were never specifically assigned to WP service. They did, however, carry the WP herald instead of the SP and UP heralds of other PFE cars. Along with our Sacramento Northern boxcar, the reefer had been sitting in the McCloud Railway yard for years and was slowly deteriorating. With the McCloud Railway pulling up trackage and its future unclear, the car needed a new home. 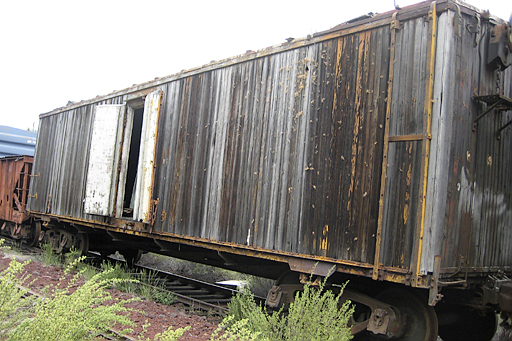 During May, 2009 BBCRC volunteers began the process of rehabilitating the reefer and converting it to a new use. A key objective was to preserve and restore the historic character of the car while converting its interior into a functional space. During the first "stablilization" phase, paint was scraped and a polyurethane sealant applied to the interior. A deteriorated plywood false floor and pallets (used to distribute cold air evenly through the car) were removed revealing a solid wood floor underneath. Patches were made to the many holes in the exterior (for this we had to wait until after the nesting season as chickadees and bluebirds were using some of the holes as nesting spots!). At a late August work party a non-toxic penetrating oil (Penefin) was used on the exterior to help preserve the fragile original tongue and groove wood siding. Electrical outlets and wiring were installed. A window was added in place of a missing door. The metal roof was scraped, rustproofed, and painted in its original PFE boxcar red color (for this we used color chips provided in the excellent reference "Pacific Fruit Express" by Anthony Thompson, Robert Church, and Bruce Jones).

Originally, blocks of ice would be loaded through the hatches into the car onto inside racks at either end of the car. Below that, metal drip pans funneled the melting water out of the car. We decided to add natural light to the car interior by using the hatch openings to install skylights. The skylights use the same hinges as the original hatch covers. From the outside, down on the ground, this design, along with a rebuilt walkway, allowed the car to retain its original look.

By late 2009 shelving and other furniture had been added to the car interior, allowing the car to house the BBCRC's library which, over the years, has grown into an extensive collection of books, zines, documents, films, and music. Beginning in 2010, we began hosting a series of art shows, book tour events, and other events, featuring both local and traveling artists. The car also includes a video projection system allowing for the viewing of films for visitors. Many of the art shows and other events hosted in the PFE reefer over the years are documented in the Images section of our website. An expansive deck was constructed out of donated/recycled materials along the west side of the reefer (and adjoining boxcar) during 2011, greatly improving access to both cars. The installation of a kerosene monitor heater system allows for year-around use of the car.

In 2018 we made the determination that the exterior tongue and groove siding on the car was beyond further repair and would need to be replaced, an ambitious and expensive process. Following a fundraising campaign, work on the car began in the Spring of 2019. Siding on the south end and east side of the car was removed. The car's original horsehair insulation, pockmarked with rodent and bird nest cavities, was removed and replaced with modern fiberglass insulation. New cedar siding was obtained from a local supplier and installed over the course of the summer. The completed side of the car was then repainted in its original PFE orange. The relettering of the car, and recreation of its Western Pacific "Feather River" logo, then commenced, with the assistance of a group of pro sign-painter volunteers. 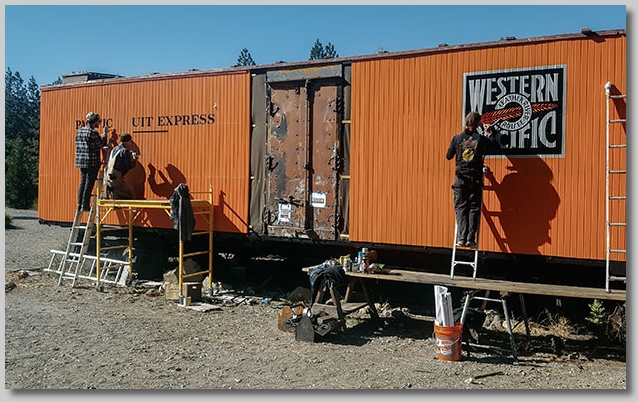 Throughout the summer and fall of 2019 BBCRC volunteers, including this signpainting crew working in October, kicked off the exterior restoration of our PFE reefer car.

Mid-way through the exterior restoration of the car, in November, 2019, disaster struck in the form of a "bomb cyclone" wind event which tore the car's metal roof off. Emergency repairs were immediately initiated. 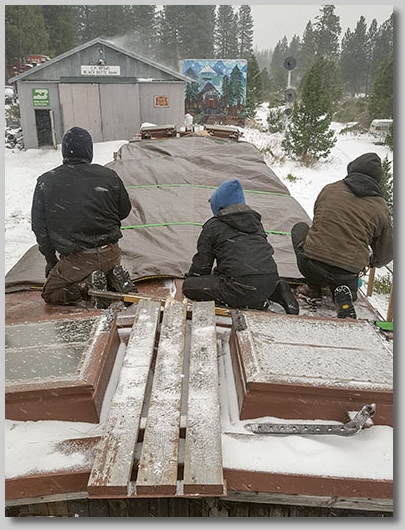 BBCRC members making emergency repairs to the PFE reefer roof on the Thanksgiving weekend after its metal roof was torn off due to high winds. Here are more photos of the storm aftermath.

A number of BBCRC supporters stepped up to help fund permanent repairs to the reefer, along with other damage which occurred at the BBCRC. By late Spring, 2020 the roof had been repaired and re-installed and the focus returned to completing the external restoration of the car. Despite the closure of BBCRC through much of 2020 due to the pandemic, all of the siding on the west side of the car was replaced and a new door installed. This put us in a strong position to complete the exterior restoration in 2021.