In 2016 the California State Railroad Museum donated the historic Southern Pacific Pullman business car #109, the "Shasta" to the BBCRC. First built in as a coach in 1888, the car was later rebuilt into a business car for the Shasta Division superintendent and was based in Dunsmuir between the early 1900s and the Great Depression, when it was retired as a business car. It later functioned as a Maintenance of Way bunk house car. The donation was facilitated by the Pacific Coast Chapter of the Railway and Locomotive Historical Society and the Southern Pacific Railroad Historical and Technical Society which contributed resources for the move of the car and initial stabilization. At the time of its arrival at Black Butte in April, 2016, the car was literally on its last legs — in fact demolition of the car had already begun in Sacramento when a last minute reprieve occurred and allowed for its move to the BBCRC. 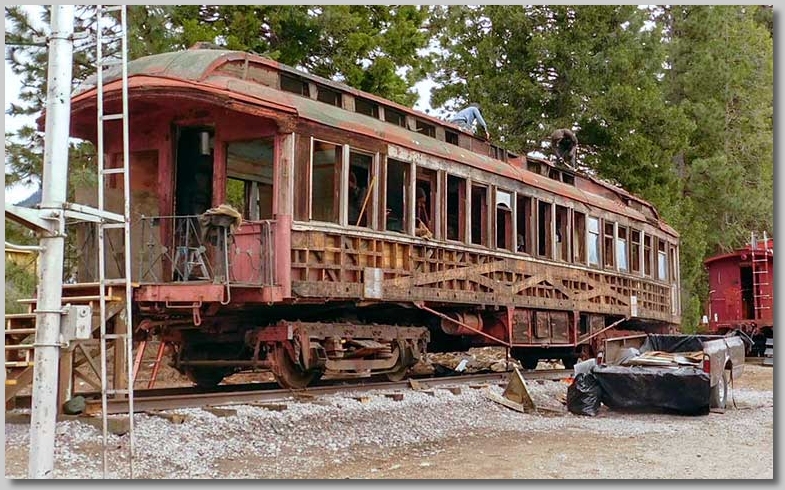 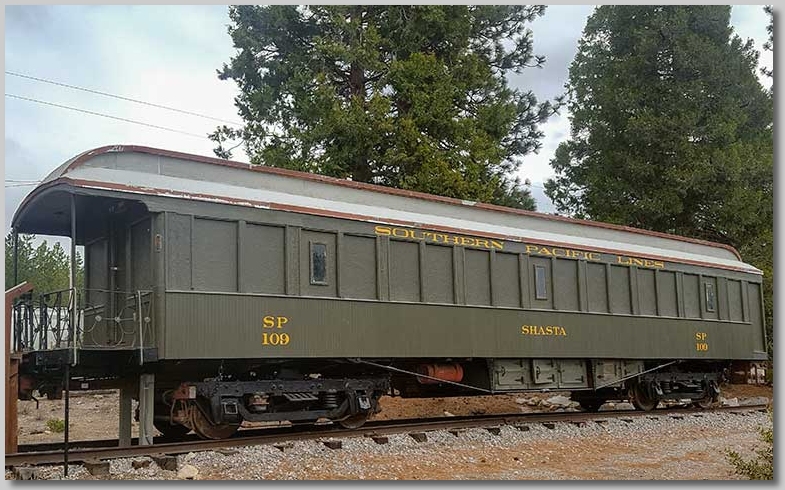 Close to four years after SP 109's arrival at Black Butte the exterior of the car has been transformed. A complex new three-part roof has been constructed. New siding was milled and installed. The car's exterior has been painted in its original SP dark olive green and it has been relettered as it would have appeared while it served as a Dunsmuir-based business car for the Southern Pacific.

The move of SP 109 to Black Butte, and its ongoing restoration by the BBCRC, has attracted significant interest, both locally and from afar. At the time of the car's arrival, our local newspaper, the Weed Press, ran a feature article on the car. Historic preservation organizations have been following the process of the car's restoration carefully and some railroad historians have offered ongoing support.

We still have years of work ahead of us in order to accomplish the very ambitious goal of restoring SP 109 and transforming it into a usable functioning space. While some exterior work remains, the focus of our efforts are now turning to the car's windows and interior. The BBCRC will need ongoing financial support and volunteers willing to spend significant amounts of time working on the car. We are hoping to be able to support a number of volunteer carpentry residencies allowing us to carry out sustained work on the car. Please see our Helping Out page for information on how you can financially contribute to this ongoing effort. And please be in touch if you are interested in helping out with restoration efforts. Most work on the car takes place in the warmer months (April through October) of each year.

We would like to thank the many people and organizations who have been involved so far in supporting this project! This has included dozens of BBCRC volunteers who have helped out anywhere from a day to weeks at a time. In particular, Mike Alford (summer 2017 carpentry residency), Logan Hirsch, Chris Andrews, and Alex McGee have all spent many weeks working on the car and have been key to the cars transformation. We are also very appreciative of the volunteer involvement of a group of professional sign-painters, organized by Heidi Tullman, who lettered the car in 2019. Those helping to provide ongoing financial support for this project are also very appreciated. This for the last three years has included an annual Shasta Car fundraiser/Merle Haggard tribute at the Grey Eagle Nightclub in Asheville, NC. We are grateful to the musicians, organizers and the Grey Eagle for their support! Thanks also to the Pacific Coast Chapter of the R&LHS, the SPH&TS, and a number of very generous individual donors.

to History and Move to Black Butte→