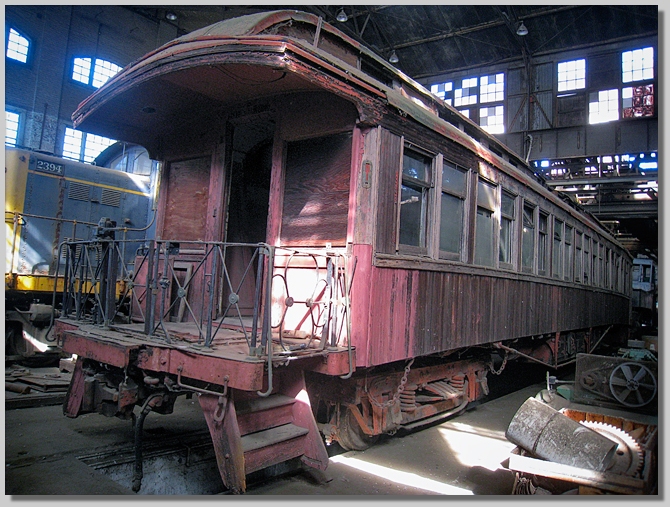 After being moved inside to prevent further deterioration in the year 2000, SP109 was stored in the former Southern Pacific Erecting Shop in Sacramento up until it was moved to Black Butte in April, 2016.
SP 109 Historical Timeline 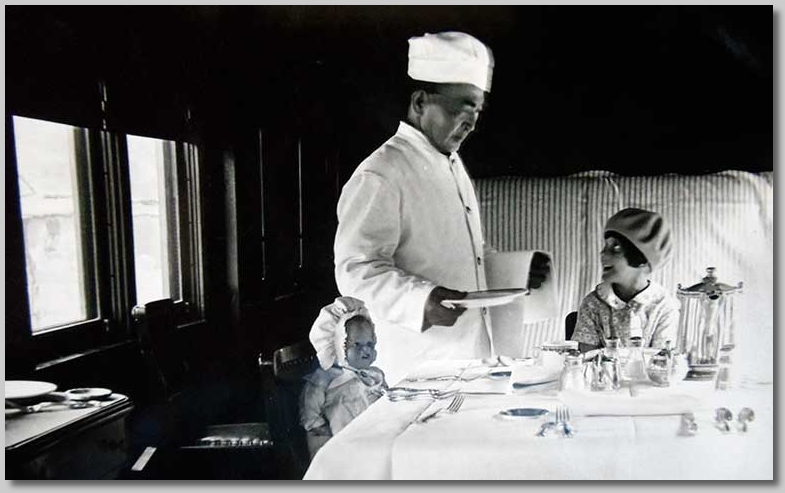 Dinner is served. SP109 in its heyday. This is the only interior photographs we have been able to locate, showing SP chef Kaichi Maekawa serving a meal to guests in the car.
Photo collection of Denny Kato (Mr. Maekawa's maternal grandson), used with his permission.

We have not found any exterior photos of SP109 in operation as the "Shasta" business car. This photo is from the later years (likely around 1950) of the car's incarnation as a M-O-W foreman's bunk car (SP MW #18). Photo taken by Caltrans while surveying for the Capital City Freeway in Sacramento. SP MW 18 is sitting on the set out track at Elvas, presumably in use as a bunk car. This view is looking south over the leg of the wye that connects the Overland Main with the Valley Main. The cannery track is out of view and on the other side of the mainline. Photo provided by Scott Inman.

Nov 14, 1957 — Sold to Henry Raub. Stored for many years in Bakersfield, and later at Orange Empire Railway Museum.

1977 - 2000 — SP #109 sat outside the Museum's Restoration Shop. By the mid 1990s the car's roof was already failing and leaking. The Shasta has suffered both from weather and occasional vandalism and "transient residence".

2016 — On April 28th , SP #109 left its longtime home in the backshop of the California State Railroad Museum and was loaded onto a lowboy truck which then took it north on I-5. After a layover in Redding, it returned to its long time home of Siskiyou County, arriving at the Black Butte Center for Railroad Culture on the morning of the 29th. On the morning of the 30th the trucks for the car arrived and then the trucks and car were unloaded and placed on a newly built section of track. 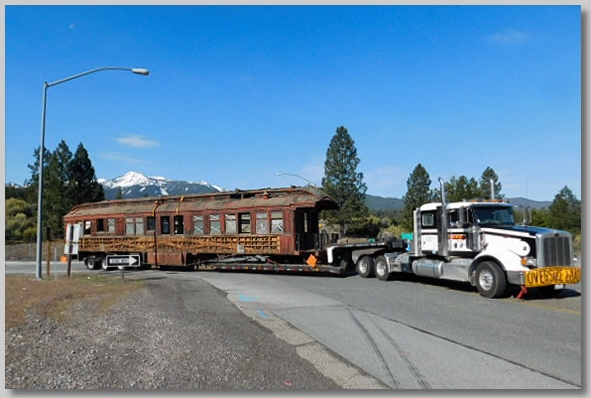 Near the end of its journey from the California State Railroad Museum in Sacramento, SP109 exits I-5 in South Weed. 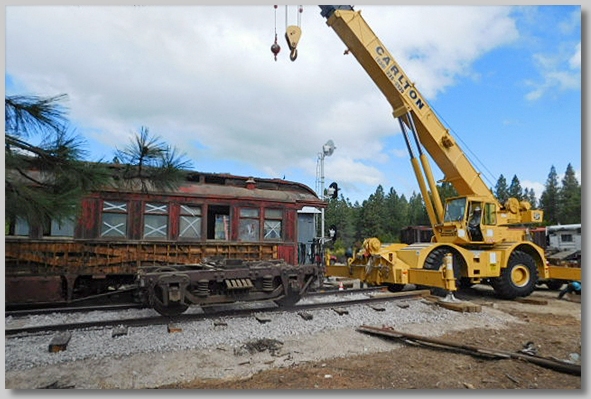 After unloading the trucks [wheelsets], our contractor, Carlton Crane of Burney, CA, prepares for the move of the 60,000 pound main car body, something that required two cranes. SP 109 is at its new home at the BBCRC.