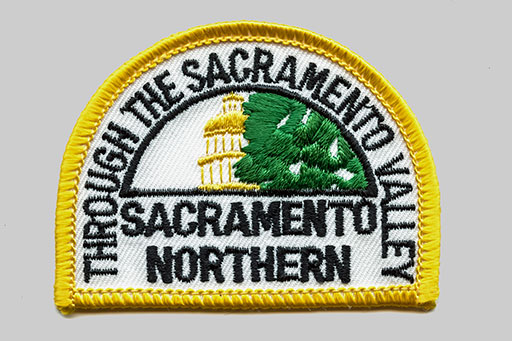 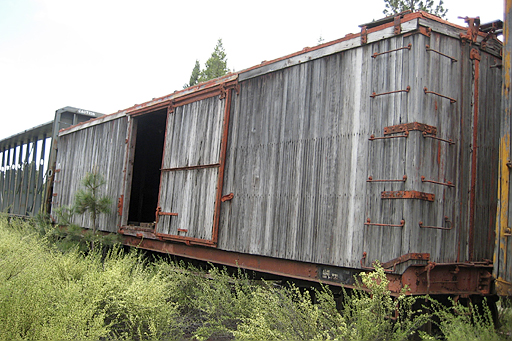 This is where we found Sacramento Northern #2349, slowly deteriorating in the McCloud Railway "graveyard" east of the town of McCloud.

In October, 2008, at the same time we also moved our "reefer" car, the BBCRC brought an historic 1919 Sacramento Northern wooden boxcar to Black Butte. The car was in good overall shape, particularly the interior. Here are photos and a description of the move.

For more information on the history of these Sacramento Northern steel-underframe boxcars, see www.wplives.org/sn/boxcar.html. 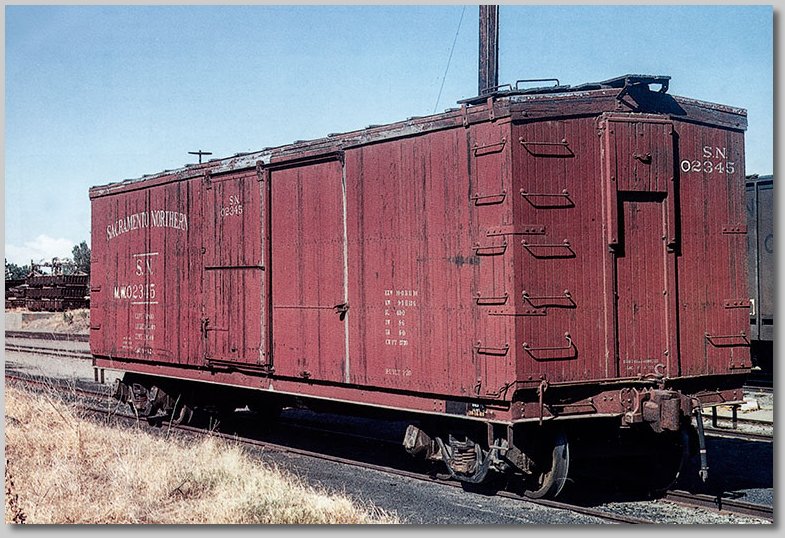 We have not found any photos of our car from when it was in service. However, this is a photo of Sacramento Northern #2345 which was built at the same time as part of the same order and would have been virtually identical to our car #2349. The unusual structure on the end of the car is a sliding "lumber door" used to load and unload boards out of the car's end. Photographed in Sacramento in 1972 by Peter Arnold. From Western Pacific Color Guide to Freight and Passenger Equipment by Jim Eager, used with permission of Morning Sun Books Inc.

It was "retired" in 1947 but not scrapped. The next year it was restored to service with AB brakes, and renumbered 2349 (part of SNRY 2329-2350). In 1954 it was converted to a maintenance of way (MOW) car and renumbered MW90. It was then retired in March, 1974 and sold to Tracy Railcar. It was resold to "The Factory", a boutique development in Alameda circa 1974/75. When "The Factory" failed about 1979, the car was apparently sold to a railfan who moved it first to Santa Rosa and then on to the property of the McCloud River Railroad. The owner had hoped to donate the car to a non-profit organization and at one time the MCRR had considered forming a non-profit branch. However, this did not happen and the car was eventually donated to the Heritage Junction Museum in McCloud. For many years the car sat in the "runaround track" yard east of McCloud. Together with our reefer, it was on used on occasional steam photo freight excursions.

This is another similar car to ours, showing what its original paint scheme and lettering would have likely looked like. Photographed in Sacramento in 1972 by Peter Arnold. From Western Pacific Color Guide to Freight and Passenger Equipment by Jim Eager, used with permission of Morning Sun Books Inc. 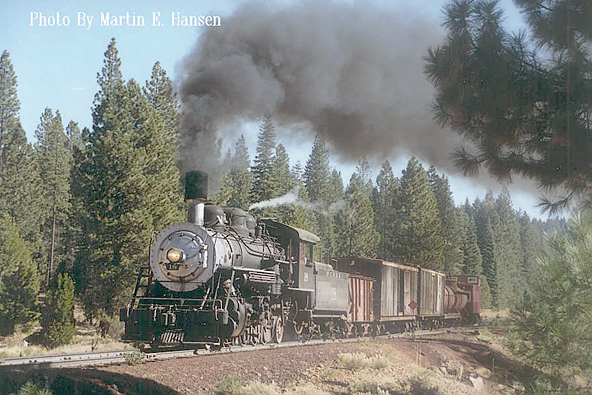 Several years before our SNRY boxcar and PFE reefer came to us at Black Butte, in 2002 they were used for a steam-powered freight photo-op trip on the McCloud Railway. Photo by Martin Hansen, used by permission. 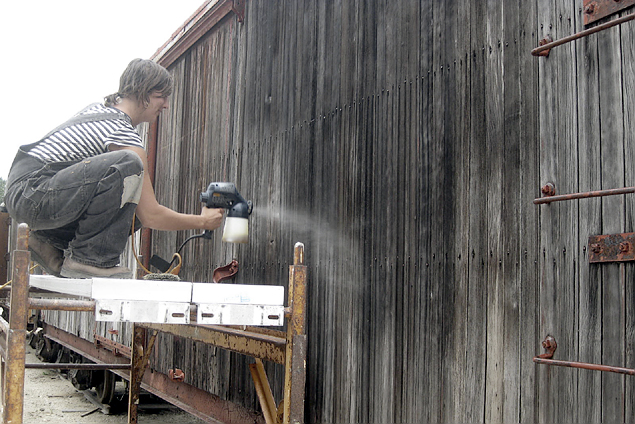 In order to protect the wood exterior of our boxcar and reefer, BBCRC volunteers sprayed a protective penetrating oil on the car exteriors.

A boxcar in which, undoubtedly, many hobos would have ridden in during the Great Depression-era has now been transformed into a music venue hosting folk, country, punk, metal, and other music, enjoyed by hundreds of people every year. In advance of our May, 2009 work party, we first set up a stage in the north end of the car for some bands that were coming through. It worked out well and over time the car evolved into a popular underground music performance space, the "Boxcar Ballroom" outfitted with a full sound system. Its all wood interior provides for great acoustics for music both loud/electrified and unplugged. Since that first show in 2009 the boxcar has hosted shows by over two hundred musicians and bands attended by thousands of people. Among the car's many visitors have been Tom Waits and Kathleen Brennan, who stopped by in the summer of 2017. The boxcar also features art work, including a mural by Trish Tripp, and is the home to our "Boxcar Shrine" dedicated to "our sisters and brothers who have caught the westbound" (a hobo phrase for having died). 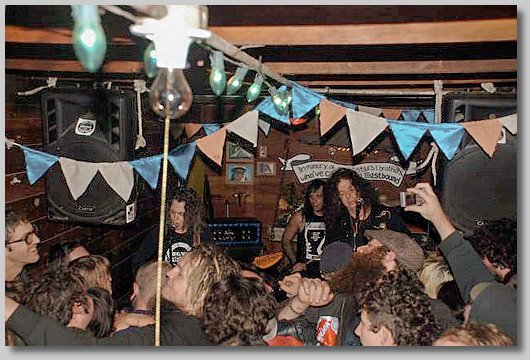 Pierced Arrows, featuring Fred and Toody Cole of the legendary band Dead Moon along with drummer Kelly Haliburton, rocking the boxcar on October 23, 2010. The over-capacity crowd for this epic show resulted in several people falling out the door and led to the decision to construct a deck alongside the boxcar and reefer!